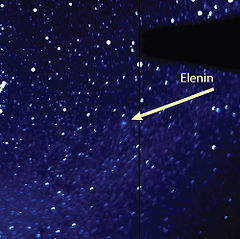 A large celestial body has already penetrated our solar system and is on course for a near and possibly horrific encounter with the earth in the fall of 2011.

There has not been much news coverage of this in the mainstream media. Imagine the panic that might ensue following the sensationalized coverage we're accustomed to in the news. For Bible believing Christians, on the other hand, we should be aware of what these events might mean and their joyful outcome.

And there shall be signs in the sun, and in the moon, and in the stars; and upon the earth distress of nations, with perplexity; the sea and the waves roaring; Men’s hearts failing them for fear, and for looking after those things which are coming on the earth: for the powers of heaven shall be shaken. And then shall they see the Son of man coming in a cloud with power and great glory. And when these things begin to come to pass, then look up, and lift up your heads; for your redemption draweth nigh. - Luke 21:25-28

There has been some dispute whether this object is a comet or dwarf star, and its size and mass is unknown. If Elenin is a dwarf, it would have a huge gravitational influence on the the solar system. If Elenin is a comet, its smaller size and mass would be far too small to have a measurable influence on anything. So, there you have the controversy... comet or dwarf? Officially (NASA and JPL) its been described as a comet, and thus no affect on Earth.

Regardless, Elenin has seemingly already affected life on Earth and is anticipated to have even more dramatic effects in the coming months. We can see in recent history when this object comes into alignment with the Sun and Earth, dramatic events occur on Earth.

While there were many other earthquakes that occurred during this period, those listed above coincided with alignments between Elenin, the Sun, and Earth. Numerous other alignments with Earth, Elenin, and other planets have also resulted in earthquakes in Chile, Algeria, Indonesia, Turkey, Vanuatu, Taiwan, China, North Korea, New Zealand, and Los Angeles.

So, with history behind us... what can we look forward to in the future?

And when ye shall see Jerusalem compassed with armies, then know that the desolation thereof is nigh. - Luke 21:20

Look at Jerusalem and events unfolding in the Middle East. Jerusalem is surrounded by armies, most of which are not friendly. I believe a key event to watch for is a covenant (or peace treaty) for one week (7 years) made between Israel and her enemies (Dan. 9:27 and Matt 24:15). This is a momentous prophetic event that leads to the introduction of the Antichrist and the culmination of end time events. Be watchful, folks, because when things begin to unfold they will likely do so at breathtaking speed and will be disguised to mislead the masses.

Take heed that no man deceive you. For many shall come in my name, saying, I am Christ; and shall deceive many. And ye shall hear of wars and rumours of wars: see that ye be not troubled: for all these things must come to pass, but the end is not yet. For nation shall rise against nation, and kingdom against kingdom: and there shall be famines, and pestilences, and earthquakes, in divers places. All these are the beginning of sorrows. Then shall they deliver you up to be afflicted, and shall kill you: and ye shall be hated of all nations for my name’s sake. And then shall many be offended, and shall betray one another, and shall hate one another. And many false prophets shall rise, and shall deceive many. And because iniquity shall abound, the love of many shall wax cold. But he that shall endure unto the end, the same shall be saved. And this gospel of the kingdom shall be preached in all the world for a witness unto all nations; and then shall the end come." - Matt. 24:4-14

I believe it's possible that if there is widespread havoc caused by Elenin, it could be the "perfect storm" allowing the setting up of the New World Order one-world government where Christians are not welcome. Verse 9 and 10 of Matt. 24 says, "Then shall they deliver you up to be afflicted, and shall kill you: and ye shall be hated of all nations for my name’s sake. And then shall many be offended, and shall betray one another, and shall hate one another." Governments around the world have been preparing this scenario with their planned economic collapse, integration of a police state environment throughout society, and the politics of division to identify and isolate believers.

Are you skeptical? If so, I understand. I don't know if these events are connected with end time prophecy and the coming of our Lord Jesus. I fully understand there have been many celestial events in the past that some have tied to Bible prophecy. It's interesting to me, though, because of the many seeming coincidences and the unfolding of many other end time prophecies in recent times. I believe, at the end of the day, we all need to be aware of events unfolding in the world around us and to be prepared.

Watch ye therefore, and pray always, that ye may be accounted worthy to escape all these things that shall come to pass, and to stand before the Son of man.
- Luke 21:36

Philosophical Roots of Change
How did we get to where we're at?

Why Study Prophecy?
God intends that we understand the contents of the prophetic Word and that it will have a bearing upon the practical decisions we Christians make.

Can the Bible be Trusted?
Do we accept what is recorded by this source as being accurate and applicable to our current-day lives?

Your Income for Life